The word prototype is defined as “a first, typical or preliminary model of something, especially a machine, from which other forms are developed or copied”, and NASA Mathematician Katherine G. Johnson, who passed away today after making 101 rotations around the sun, was definitely that. But luckily the mold was not broken. In fact, Johnson helped draft the blueprints.

Thanks to Katherine, and her accomplishments, Black people found a respectable place in the intellectual, scientific, and experimental world of space travel and beyond.  Katherine was a computer before a computer was a computer. Without her knowledge and know how, the US may not have been able to calculate astronaut John Glenn’s orbit around Earth or the moon landing. Keep in mind that the US was in a space race with Russia meaning time was of the essence and the fate of the American space program relied on the brain power of a Black woman from West Virginia, along with many other Black women who worked for NASA during that time. And her accomplishments may have gone unnoticed if not for the 2016 non-fiction book Hidden Figures, by Margot Lee Shetterly, documenting the role of Black women during the most crucial time for NASA.

Joining NASA in 1953, Katherine Goble Johnson paved the way for Black women to work, be respected, and be taken seriously in the field of STEM (Science, Technology, Engineering, and Math), shattering racial and social barriers, one calculation at a time. Johnson worked at NASA for 33 years. She retired in 1986.

We are forever indebted for the contributions she has made to the Black community, this country, the world, and beyond. When we say ‘reach for the stars’ we are talking about Katherine G. Johnson energy….the prototype. 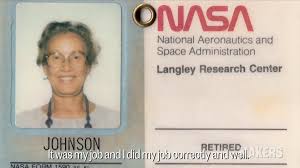