Twenty-five years ago, in an apartment in Detroit,MI, five friends joined forces to open their own restaurant after receiving a $4,000 tax refund. The group sat and began to throw out ideas on what type of restaurant it should be. Cole Brown, one of the five friends who was a connoisseur of hats, pintos, and BBWs named Shirley, shared his insight on what he considered to be a surefire $1million idea: Rent ‘Em Spoons. See at this restaurant….well, I’ll let Cole tell it:

Unfortunately, the rest of the gang did not share Mr. Brown’s enthusiasm. Once Cole removed his best friend Martin Payne’s finger from his eye, and proverbial foot from his ass, the gang opted instead to open “Marty Mart’s Meatloaf and Waffles”. 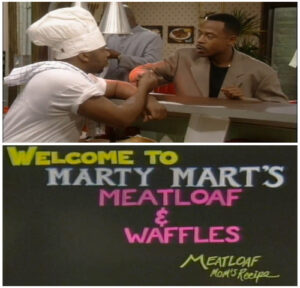 Unfortunately the restaurant was far more of a success than the group anticipated thanks to Mr. Brown who not only served as executive chef but also as the restaurant’s marketing director, handing out five-for-one coupons to diners, resulting in Mr. Payne’s immediate evacuation of Marty Mart’s Meatloaf and Waffles. Luckily….an investor came to save the day, willing to purchase the restaurant at a profit in order to open….Rent ‘Em Spoons. 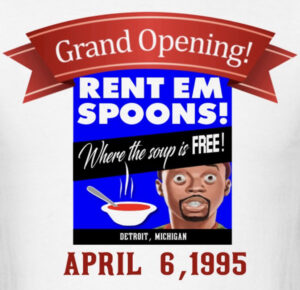 So if you’re looking for a bite to eat in the Detroit Area, stop by “Rent ‘Em Spoons”, where the soup is free. Use the coupon code “Big Shirley” to receive 10% off your spoon rental.

This moment in black history has been brought to you by WZUP.