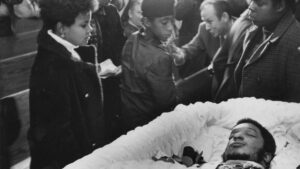 Fifty years ago, on December 4th, 1969, one of the Black civil rights movement’s brightest, energetic and unapologetic voices was assassinated in a state-sanctioned hit. He was 21 years old. he was the Illinois Black Panther Party Chairman. He was Fred Hampton. Hampton, who had never been shy about speaking up for the oppressed people(the proletariat), was shot and killed while laying in bed with his pregnant wife. When Hampton died, so did the revolution. And to a certain degree, you can’t blame those fatigue with our leaders being assassinated considering Martin Luther King Jr. Malcom X, Medgar Evers, Fred Hampton and countless others had been assassinated in the 1960s.

On this day, 50 years ago, Chicago PD rushed into the headquarters of the Chicago Black Panther Party, with the blessing of the Cook County State Attorney’s Office and the FBI (as part of COINTELPRO used to dismantle Black Civil Rights orgs and movements), stating that they were fired on upon knocking at the headquarters’ doors. This was their story despite the fact that there had been 83-90 shots fired by police into the building and only one shot fired out.

Whenever you listen to the words of Hampton, you can see why they killed him. This brother was the last leg of a revolutionary generation who literally put themselves, and their lives, on the line to fight against the oppressive and racist nature that is America. Fred Hampton was the last of a dying breed. Its current iteration is all bark with no bite. How many of us now would have the balls to do what Hampton did at 21? How many of us have the balls to do it now?

In August 1969, four months before his assassination, Hampton spoke at the “People’s Church” on Ashland Avenue in the heart of Chicago. It was there that he said the following:

If you ever think about me, and you ain’t gonna do no revolutionary act, forget about me. I don’t want myself on your mind if you’re not going to work for the people. If you’re asked to make a commitment at the age of twenty, and you say I don’t want to make a commitment at the age of twenty, only because of the reason that I’m too young to die, I want to live longer, then you’re dead already. You have to understand that people have to pay a price for peace. If you dare to struggle, you dare to win. If you dare not struggle then damn it, you don’t deserve to win. Let me say peace to you if you’re willing to fight for it.

So…are you? Because if not, then you can consider the revolution as dead as the revolutionary who sacrificed their lives for it. You can also go ahead and keep his name out ya mouf.

I’m only gonna say it once. Let’s Get Uncomfortable.