Back in January 2020, Black-British Get Out/Black Panther actor Daniel Kaluuya, who was born to Ugandan parents, was doing promo for his newly released film Queen & Slim (another film about Black Americans starring Black Brits but I will get to that later). During this promo, Kaluuya did an interview with Radio Times where he “said he was resisting the racial narrative into which he felt he was being forced“.

“I’m not going to ignore that I’m surrounded by [racial issues], but I’m not defined by it. I’m just Daniel, who happens to be black.”

Basically, Kaluuya didn’t want to be typecasts as that “race guy” even though he starred in films where being Black was primary to the story. I digress.

Kaluuya’s latest role is starring in Judas and the Black Messiah as the late great Black Panther revolutionary Fred Hampton, who was 21 years-old when he was gunned down in his bed by federal and local law enforcement.

Fred Hampton, who was truly the voice of a movement and generation, was a Black American who was born, raised, and died in Illinois. Hampton became a the figure he is known for today because of the day-to-day racism and systemic oppression he felt and saw as a Black man growing up in America. It is what drove him to the Panthers. Hampton not only fought for Black people and for working-class people. He was a true uniter in organizing people in understanding who the common enemy was. 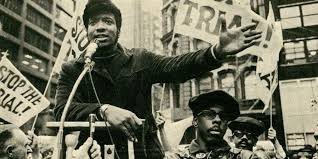 It was for this reason he was assassinated. And it is for this reason that I would assume Hampton would roll over in his grave by his depiction being  a Black Brit, of immigrant parents, who is not defined by his Blackness (Kaluuya’s words, not mine).

And if you think this article is being divisive then you are right. It is. And please don’t “AtLeAsT oUr StOrIeS aRe BeInG tOlD”. I am happy that people will learn about Fred Hampton (who should be and American household name) however, remember when they told Harriet Tubman’s story (starring Black Brit Cynthia Ervo)??  This is not enough especially if the Black actors getting these roles are incapable of truly understanding the experiences they are portraying.

And this is why I am not excited about this Fred Hampton film Judus and the Black Messiah because I am unsure Kaluuya even understands the spirit of Hampton or the movement as a whole. He can method-train, and perfect his accent and cadence, but none of that supplements the experience of being a Black American.

Shaka King, Director of Judas and the Black Messiah, defended his decision to cast Kaluuya as Hampton stating:

“Kidnapped Africans ended up all around the world,” King said. “We have a lot more in common than people think, in terms of our experience and trying to overthrow white supremacy.”

Yes, African victims of the slave-trade have more in common than we think, but that does mean that I can tell the story of a Afro-Brazilian because their experience of being Black in that space varies from mine. And this goes both ways. Will Smith (Concussion), Don Cheadle (Hotel Rwanda), and Forrest Whitaker (Last King of Scotland) should not have played Africans. There is too much new raw talent for us to constantly go into the bin of familiar faces that make us comfortable. And of course you have to factor in studios who put profit over everything.

I’d like to note that the director of Judas and the Black Messiah is a Black American born to Caribbean parents which I would like add is its own experience separate from a descendants of a “native americans of african decent”. Growing up a direct product of American slavery, meaning your parents, parents, parents, parents, parents, all trace back to the USA hits different when you account for the journey and history of  our ancestor over this time.

It is time for the entertainment industry, the diaspora, and the world as a whole start putting some respect on Black Americans’ names. We appreciate you fighting for us and with us on this journey for racial equity but you have to also be mindful to not silence us and that happens every time we are restricted from telling our own stories.

That said, Daniel Kaluuya better KILL THIS SHIT. You hear me? Fred Hampton is not the story that you want to fuck up. He is too important to us. I am also worried about how his story will be watered-down to appease white audiences and/or which made up “Great White Hope” character they will add to make white people feel like there is at least one white person they can delusionally see themselves in. Only time will tell.