I tried to take my time gathering my thoughts about what transpired on Wednesday, January 6th, 2021. I needed time to allow it to breath. It still hasn’t been aired out appropriately.

On January 6th, 2021, White supremacists stormed the U.S. Capitol, at the urging of President Pumpkin Spice, in an attempt to overturn a free and fair election. But in reality, their attempt was much more sinister. Law enforcement agencies, mostly White thugs, and the President of the United States plotted to overthrow the government. This was a planned and coordinated attack against democracy…in plain sight! 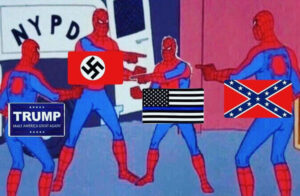 This was an inside job fueled by Little Dick Energy. Those who stormed the Capitol weren’t people. They weren’t even human. They were monsters. The descendants of American “patriots” who used to lynch Black bodies as pastimes. This is just the beginning. These monsters will not stop. 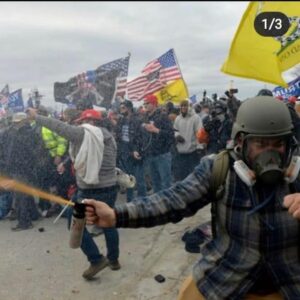 “The root of the black man’s hatred is rage,
and he does not so much had the white man
as simply as want the out of his way,
and, more than that,
out of his children’s way.

The root of the white man’s hatred is terror,
a bottomless and nameless terror,
which focuses on this dread figure,
an entity which lives only in his mind.”

What transpired on Wednesday made me reflect back to a book I read a month or so ago called Ring Shout by author P. Djèlí Clark (@pdjeliclark). 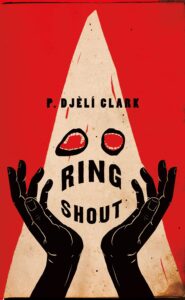 Ring Shout is a story about three Black bootleggers who also moonlight as Ku Klux monster hunters. These aren’t your normal Klan who wear hoods and terrorize Black people, though they are directly associated with them. No, these White MONSTERS wear the skin of white Klan members. 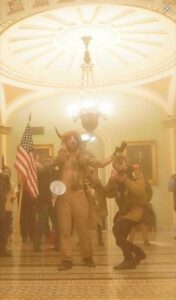 These monsters can wear many skins, but it can never hide its stripes.

They are the monsters we see in every time Karen or Kevin call the police on Black people minding our business.

They are the monsters who see us as threats because of the color of our skin. These monsters are filmed taking our lives. They use their skin as a shield so that they are able to unjustly murder us and then arrive home safely to their families while enjoying paid administrative leave. 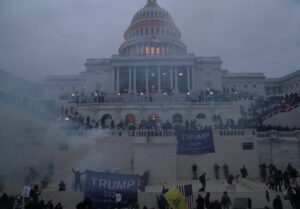 They are the monsters that force Black families to have “the talk” with their kids.

They are the monsters that Black people have been telling you about but were dismissed as if they were make-believe like Big Foot or the Lochness. If I had a dollar for every time I’ve said “We told you so” to my White liberal associates who are shocked by this brazen act of terrorism, I’d have enough money to hire security, who would be much better at guarding the Capitol than what we saw on Wednesday. 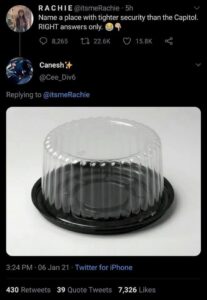 These monsters have been has been breeding and multiplying since this Country’s inception. Right under its nose. Deeply infiltrated within every facet of our criminal justice system. Deeply engrained within the culture of law enforcement. Hiding in plain sight in the Blue brotherhood. Blue Lives.

And America is such an enabler of these monsters, that they are allowed immunity and redemption. These monsters are given chance after chance to stop acting like monsters even as they vilify and literally crucify their victims (Black lives) to justify their monstrous behavior. 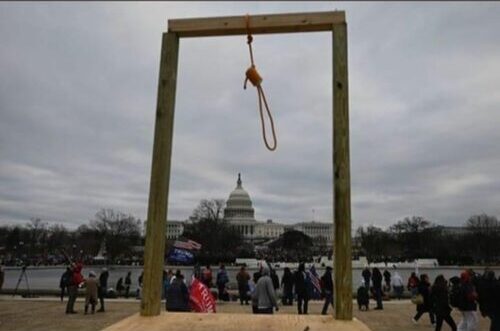 But these monsters can’t deny what they truly are. If PTSD from slavery can be passed down genetically to Black people, why can’t the monster gene pass down in the DNA of White people? A gene of pure and irrational hate, superiority complexes, little dick energy, the idea of being invincible, entitlement, and inherently evil characteristics biologically passed down to these monsters. Monsters beget monsters.

Those who stormed the Capitol were bred from those same monsters who led lynch mobs, and brought their children to collect souvenirs of the remains of burnt black flesh. 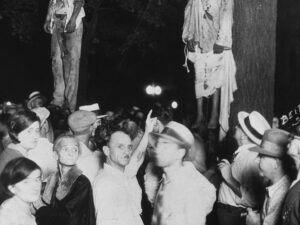 These are the monsters who bombed Black house and churches, who beat, shot, and maimed Emmett Till on the sheer notion that he may have whistled at a white woman. Only a monster could take life over something so trivial, even if it wasn’t a lie. 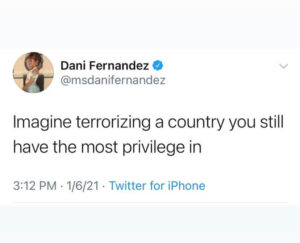 We are fooling ourselves if we believe these monsters can change. We can’t expect these monster to be rational. We can’t reason with them. These monsters don’t want to be tamed. They revel in their monster heritage and history.  Homegrown, purebred, American monsters. They wave their hate-fuel flags proudly. 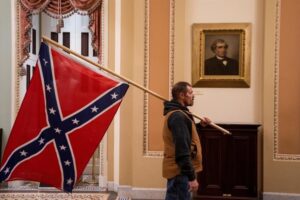 Since the first colonizers stepped foot on this land, America has turned a blind eye to the carnage it caused. It has rewarded its monsters for doing its bidding.  These monsters are never punished. They are strategically placed in vulnerable spaces that allow them to thrive as monsters. They are given free reign to run wild, ignoring laws they know don’t apply to them. 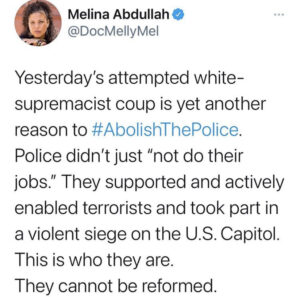 America, you bred and trained these monsters for over 400 years. Now it is up to you (White America) to either discipline them or put them to sleep. But you can’t keep inviting folks over to your house knowing full and well you have unleashed monsters roaming about freely. The chickens have come home to roost and the Black Delegation has collectively decided to sit this one out. 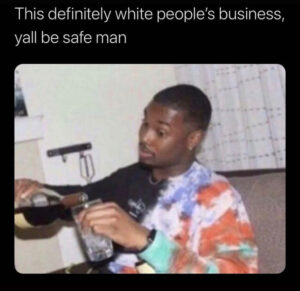 These monsters, also known as Patriots, are a part of a hate and terrorist group known as MAGA. Its leader is Donald Trump. We need to brand this accordingly. Let’s make Patriots a dirty word. Synonymous with monsters. Because truth be told, most of those who refer to themselves as ‘patriots’ tend to look like those terrorists who attempted to overthrow the government. 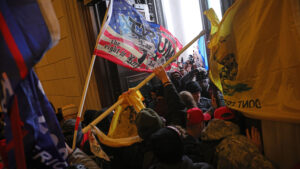 White supremacy should be classified as a Schedule I Controlled Substance. These monsters are addicted. Whiteness clouds their judgement and makes them think that storming the Capitol because their guy lost is equal to Black people protesting against a system that has always had minimal-to-zero value for the civil or human rights of Black Americans….ever. 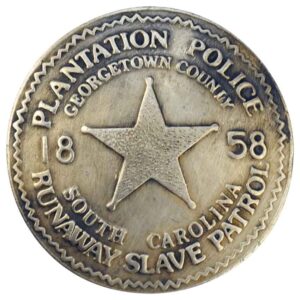 The world saw it. A clear line drawn in the sand. Us vs. them (MAGA) vs them (Democrats). Neither are our friends. Law Enforcement was not created to enforce laws. It was created to police black bodies and the bodies of those who are not considered ‘patriots’. What more proof do you want?

What happened on January 6th, 2021 should be enough for criminal justice reform, on a macro and micro level, to be the #1 issue for this new administration. This is an issue of national security.

This hate and corruption is woven deep into the fabric of the flag they wave. A complete overhaul is required on the local, state, and federal level. The system isn’t broken. It is working as it was designed. There is no denying that anymore. 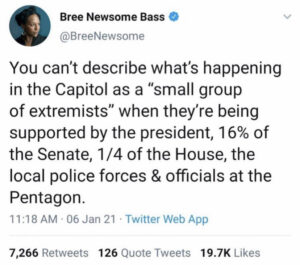 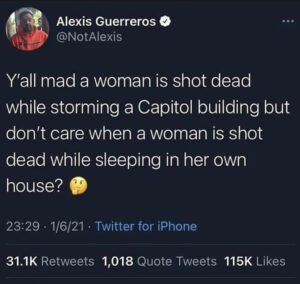 But now is actually a perfect time for Black people to use this to our advantage. How can we benefit from white chaos? The Black Renaissance is now. The Roaring Twenties are back baby!

Throughout history, Black communities were able to thrive independently. It was just the little dick energy from these monsters who burned our towns to the ground because they couldn’t stand to see us thriving. 1921 Tulsa was not the exception. It was the rule.  Black people clearly need safe spaces in America. We need our own communities that operate for us and by us. Now is the time to lay the framework for what that looks like during this window of opportunity. 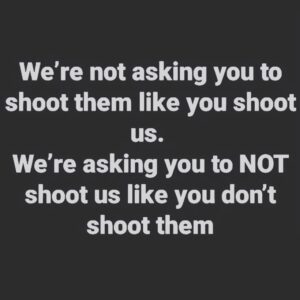 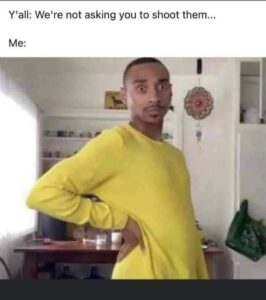 We need more Black militias, community policing, and self-defense training. They Bucked so clearly we need to be prepared to Knuck, but only if Knucking is absolutely required from us. There is no need for us to get involved in any white on white violence.

LEVERAGE. That is the word of 2021. It is time that we leverage our magic for tangible and substantive returns on investments.  And yes, that includes reparations. We aren’t asking any more. These are demands. 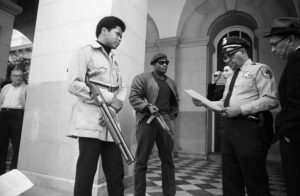 Two members of the Black Panther Party are met on the steps of the State Capitol in Sacramento, May 2, 1967, by Police Lt. Ernest Holloway, who informs them they will be allowed to keep their weapons as long as they cause no trouble and do not disturb the peace. Earlier several members had invaded the Assembly chambers and had their guns taken away.

Black people move different. And as birthright and blood-right citizens, whose backs were bent, bloodied, and broken building this country that these monsters take ownership of, we must seize this opportunity like they seized the Capitol. This is a call to action.

I know it is frowned upon to highlight problems without offering solutions, so here are a few:

This is just a start, and fully negotiable amongst certified members of the Black delegation.

We are living in history right now. The names and faces participating in this moment will be cemented in time as stories are told and retold about White Wednesday and how we got here. We will be the elders/ancestors who were documented during this segment of world history. 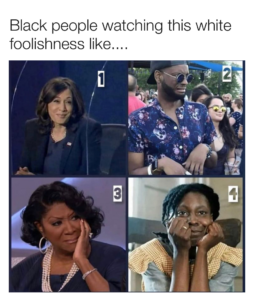 And please do not be distracted by the new found outrage of those who enabled those monsters. I am talking about Twitter, Instagram, IG, and whichever other social media platforms who are now taking steps to try and ban white supremacists. Too little. Too late. 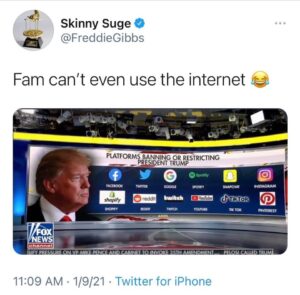 For YEARS, these platforms allowed the murders of Black bodies to trend. Shared and saved like baseball collector items. Our lifeless bodies meme’d and mocked on THEIR platforms without so much of a blink.

They worked with news media to play our beatings and our deaths and our pleading and our cries on a loop.

And now when the chickens come home to roost, they want to start cracking down? Shame on them.

Pandora’s Box is open. You can not put the toothpaste back in the tube. It is too late to fix this through censorship.

No one should be celebrating these social media bans. If anything, we should be side-eyeing these companies because they always had this power to use but chose to be selective in how it was executed. Black Like Vanilla has had posts deleted simply because it showed a Black man holding a gun for protection. That went against their ‘community guidelines’. FB jail is filled with Black voices who are in there for having the audacity to comment on white foolishment. Shadow Bans are real. These companies allow their platforms to be used for hate because it was friendly to their bottomline. Whatever keeps people consuming. Why would they police hate when it is so profitable to them? 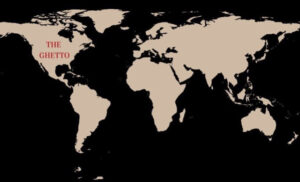 What happened on Wednesday was not a result of recent tweets. It was a culmination of decades of propagating dogwhistles to white racist. The Southern Strategy. But now that a new administration is taking office, these social media platforms are doing CYA (Cover Your Ass) to prevent the new majority Democratic Congress from aggressively regulating them for allowing these fires of hate to burn for so long. 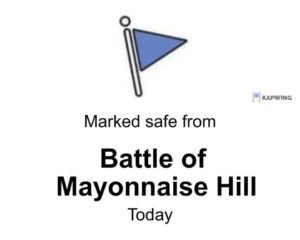 The 2020 election did not end the regime of hate. It was actually the declaration of war. This enemy calls themselves “Patriots”.  The first battle, also known as The Battle of Mayonnaise Hill, was an attack on Capitol. There will be more. And we, Black people, need to get out and take advantage of every opportunity this moment in history provides to us…by any means necessary. 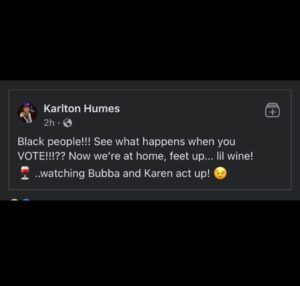 Because if Wednesday thought us anything, it is that White lives matter, excessive force is optional, and law enforcement is complicit. PERIODT.