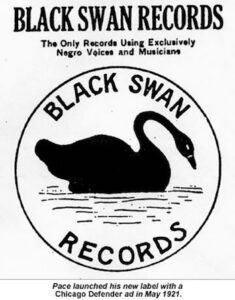 What made Black Swan Records so special isn’t just its place in Black culture or history, but also it’s intent. Black Swan Records was created as a vehicle of social and economic power for Black people, using the power of music and business to motivate our people during the Jim Crow era.

Black Swan Records was founded in 1921 by Harry Pace. Harry Pace was HBCU made, graduating from Atlanta University in 1903 where he was valedictorian of his class. It was there that he struck up a relationship with a faculty member by the name of W.E.B. Du Bois. After college, Pace went to Memphis to help W.E.B. DuBois launch the Moon Illustrated Weekly, the first weekly magazine for Black people. In Memphis, Pace met Black composer and musician W.C Handy , and together they formed the Pace and Handy Music Company in 1912. 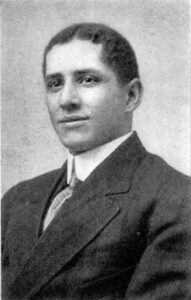 By 1918, and after many business disagreements with Handy, Pace set out to New York. In December 1920 Pace founded Pace Phonograph Corporation. Pace wrote W.E.B. DuBois informing him of his new venture. It was DuBois who suggested Pace print records under the label “Black Swan Records”, an ode to Elizabeth Taylor Greenfield, the best-known black concert artist of her time, who was known as The Black Swan. W.E.B DuBois served as a board member of Pace Phonograph Corporation. The company had investors from all over the country. Bert Williams, one of the most successful and versatile Black entertainers of his time, was also an investor. Pace’s Harlem townhouse served as Black Swan Records’ headquarters: 257 W. 138th Street. 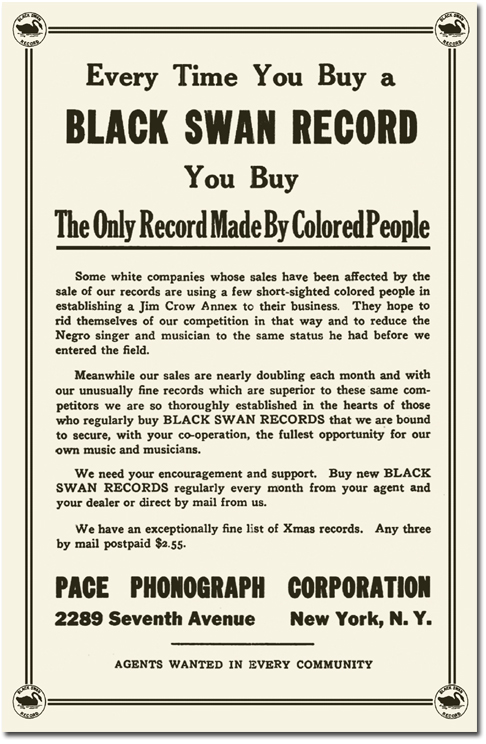 For context, Black Swan Records, or any independent label at that time, was only able to exist because the expiration of patents of the three major record companies of the time: Victor, Columbia, and Edison. In addition, those labels did not issue music by Black artists or employ Black people. In fact, they went out of their way in order to do so, issuing music from international artist but not Black Americans.

During this time, there were two markets for Black audiences: the smaller market of the Black bourgeoisie who preferred culture and refinement and the larger Black working-class population who preferred Blues and Jazz. Pace wanted Black Swan Records to be more than “Black music”. He wanted to use it as an opportunity to break stereotypes and expose ourselves, and the world, to how multi-facet Blackness truly is . Black Swan Records made sure to market itself as the the “only phonograph company in the world owned and operated by Colored people”. 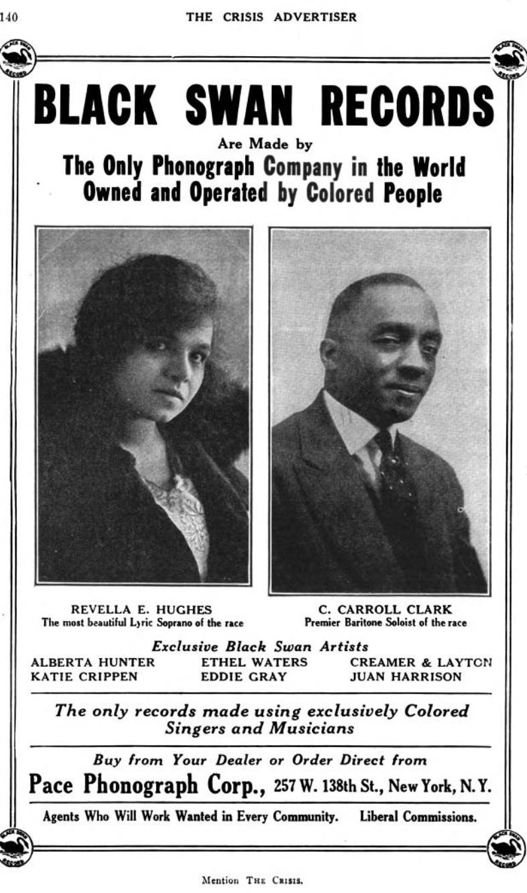 Black Swan Records’ inaugural releases were “At Dawning” and “Thank God for a Garden”, both concert pieces sung by Revella Hughes followed by the release of Blues-inflicted pop tunes. Black Swan Records also released jazz and “negro spiritual” records. The first recorded version of “Lift Ev’ry Voice and Sing” was recorded by the Manhattan Harmony Four for Black Swan Records. Pace told The Talking Machine World, “While it is true that we will feature to a great extent ‘blue’ numbers of the type that are in current favor, we will also release many numbers of a higher standard.” Black Swan Records ran numerous advertisements in Black publications, included The Crisis magazine, the official publication of the NAACP. 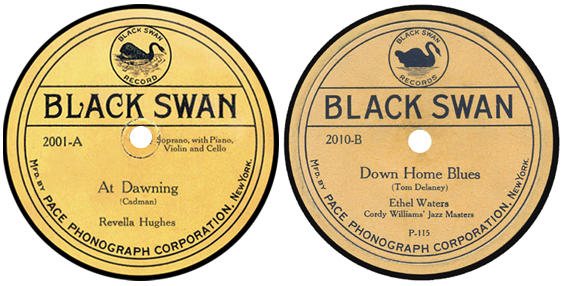 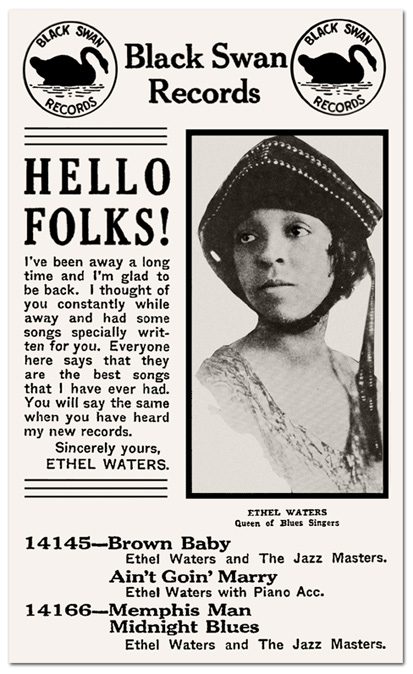 White audiences began paying attention to Black Swan Records however Pace would not cater to them. Pace struggled with getting his records nationally distributed. This can be attributed to racism as well as lack of faith in the market. Pace believed that the white-owned record labels did not want Black Swan to succeed. 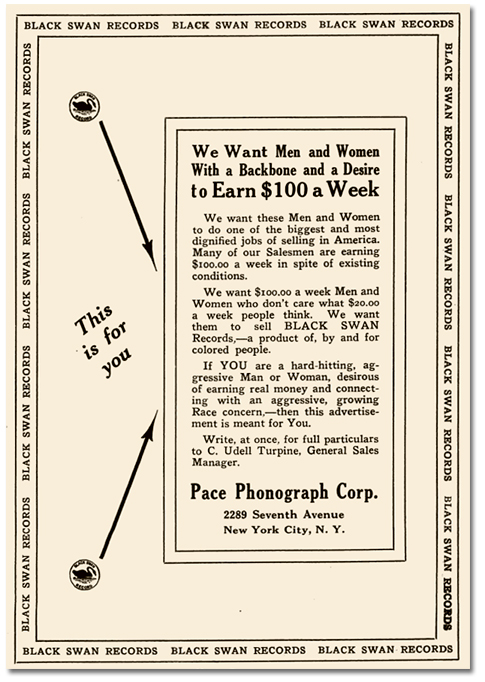 To combat these obstructions, Pace created entrepreneurial opportunities for Black people across the country. He enlisted them to sell his records whenever and wherever they could. The acclaimed singer, actor, and activist, Paul Robeson worked for a short time as a Black Swan Records salesman. Unfortunately he did not have an opportunity to record with the label. 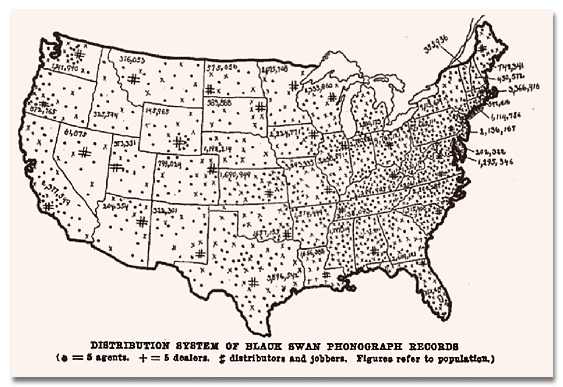 Unfortunately, by January 1922, profits for Black Swan Records were meager, even though it sold 250,000 records to date. For comparison, the white-owned Victor sold 55 million records over the same period. Black Swan Records launched the Red Label Series which were solely classic records. It lasted for a year. 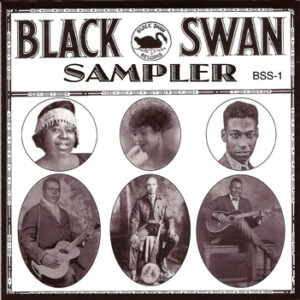 Sales began to stall and Pace got desperate. In an attempt to raise revenue, Pace began a partnership with the Olympic label and began releasing songs by non-Black artists under pseudonyms of “blacker sounding” names. An example of this is the White Xylophonist George Hamilton who was billed as “Raymond Green”. This went against the “All Black Everything” branding created by Pace. By 1923, artist began to flee Black Swan Records. At the same time, competition in the Blues and Jazz markets began to increase as well as the entire phonograph industry was disrupted by the advent of radio. This, compounded with Pace’s financial woes, resulted in Black Swan Records being sold in 1924 to Paramount. This meant that that all “race records” were now 100% owned and distributed by white-owned record companies.

Pace went on to leave the music business entirely, getting a law degree from the University of Chicago and eventually opened an insurance business. 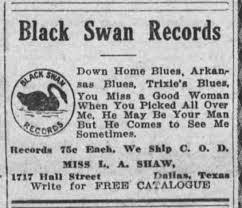 Black Swan Records is credited with showing the “majors” how to market to Black audiences. It was revolutionary in its undertaking and no doubt paved the way for the Black-owned record companies of today. It is responsible for the evolution and popularity of the blues. Black Swan Records existed to motivate and inspire us to support our own because the more we do that the greater market we can create to showcase our magic, for us, and by us.