We are watching the making of history. The American people took our frustrations to the streets in dozens of cities across the country, collectively protesting the unjust killings of Black people. These protests were set off days prior by the lynching of George Floyd by the Minneapolis Police Department. This happened just days after learning about the lynchings of Ahmaud Arbrey and Breonna Taylor. We finally hit a tipping point. We marched in the name of all of those Black women and men whose lives were cut short for being perceived as a threat simply for being Black in America.

I’ve been marching for Black Lives for YEARS. I shout out their names and weep for their families. It is hard to say this but I often forget that I am a part of those families. My uncle’s name is one who should be shouted. His name is Billy Williams. He was a 21 year-old unarmed Black man when SIX Beverly Hills Police Department (BHPD) officers shot and killed him.

I am sure you are wondering how one can forget their own family tragedy. See, my Uncle Billy was killed a few years before I was born. I never knew him. He was this “ghost” my family never really talked about and now I know why. It hurt them too much. I knew my Uncle was killed by the police but I never really internalized what that meant until I got much older.

I can’t tell you how surreal it is researching your own uncle’s murder, especially to the backdrop of a revolution against police brutality against Black people.

I can’t explain what it is like to read court documents detailing how the officers engaged him or how many shots were fired and how many hit his body.

I can’t explain the emotions I feel reading articles stating that my uncle’s murder was classified as a “justifiable homicide”.

I can’t explain what it is like thinking about my grandparents being the grieving parents forced to speak out against the unjust treatment of their ONLY son.

I can’t explain what it is like to know that if this happened now my uncle’s life would be reduced to a hashtag. 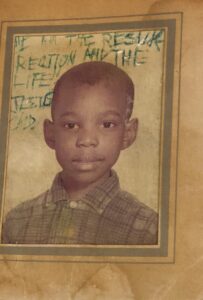 Born Wilbert Williams, Jr, he was known as Billy. My Uncle Billy was born and raised in Trenton, NJ and was the youngest of five. He was also my grandparent’s only son. Uncle Billy was a gentle spirit, who was sweet, kind, never raised his voice, played basketball, and loved comic books.  He had a huge Marvel collection and I am told that Spider-man was his favorite.

My Uncle Billy did suffer from mental illness during his later teens and spent time in and out of mental institutions. He was never aggressive or violent but he was diagnosed with schizophrenia. He started to hear voices. Since Uncle Billy was the youngest, by the time he got older all of my aunts had moved out and he was alone, living in a some-what chaotic household. He spent his time smoking weed, painting, listening to Black revolutionary music, but had no outlets to help him process what was going on mentally.

My Uncle Billy eventually found a better head space and moved to Pennsylvania where he worked for an Amish family. He decided to leave Pennsylvania and move to Los Angeles to stay with his sister, my mother. He arrived in Downtown Los Angeles by bus on May 18, 1979. From there he hopped on a city bus headed to my mother’s but he never made it. 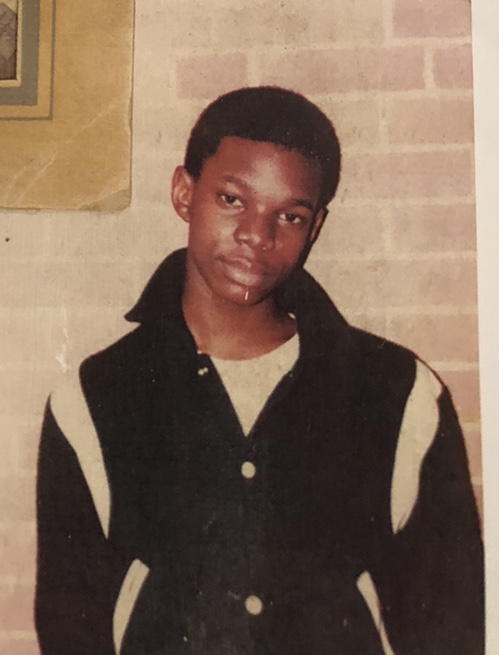 On in May 18, 1979, my Uncle Billy got lost on his way to my mother’s home. It was around 4:00am and he found himself in Beverly Hills. Uncle Billy was seen coming out of a park on Santa Monica Blvd and Doheny Drive by BHPD officers B.W. Moody and Michael Hopkins. These officers were on a “special crime suppression detail” looking for a rapist/burglar” (who ironically was known as “Spiderman”) who my uncle fit the description of: black, tall, slim.  *insert deep eye roll*

Having suffered from mental illness, on top of being lost in a new city, my Uncle Billy was startled by the police questioning him. The officers stated my Uncle Billy was belligerent when he refused to be pat down. Backup was called and four additional officers arrived at the scene. That means there were six BHPD officers there to “respond” to just ONE tall, slim, unarmed Black man who was likely having a mental episode because of the circumstances. 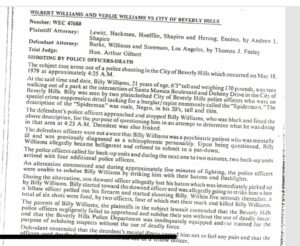 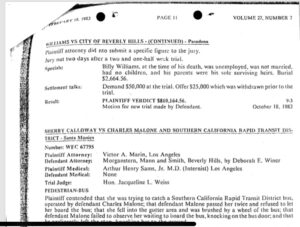 The report states that there was a five-minute scuffle. where “the officers tried to subdue Williams by hitting him with their batons and flashlights. Two officers were knocked to the ground and one dropped his baton.” The officers claimed my Uncle Billy reached for the baton and that deadly force was needed to “protect the lives of a fellow officer”. Six shots were fired by two officers. Four of those hit my uncle in the back.

Los Angeles County district attorney’s special investigative unit later ruled the shooting was a justifiable homicide. My grandparents, Wilbert and Verlie Williams sued the City of Beverly Hills for “negligently failing to apprehend and subdue their son without the use of deadly force: and that the Beverly Hills Police Department was inadequately equipped and/or trained for the purpose of subduing suspects without the use of deadly force.” My grandfather was told that it would be a hard time to win a case against BHPD. The only attorney who would take the case was a young Jewish attorney named Andrew Shapiro. My grandfather wept on the witness stand during my uncle’s civil death trial.

In October 1982, three years after his murder, a Superior Court jury agreed 9-3 with my grandparent’s contention that the Beverly Hills police were inadequately trained and used excessive force in the shooting death their only son. They were awarded an $810,000 civil suit judgment against the city of Beverly Hills. 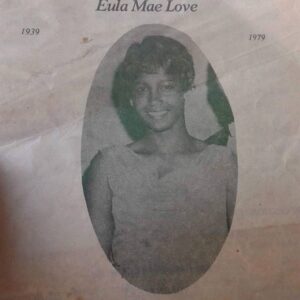 Eula Love, a Black mother killed in her home by LAPD

For context of how systemic this problem is with how law enforcement police Black people: Four months prior to my uncle’s murder, LAPD shot and killed 39 year-old Black mother Eula Love. On January 3, 1979, Eula Love was killed over a $66 unpaid gas bill. Love was a widow and mother of three. She lived in the Watts, located in South Los Angeles. Love had been struggling to keep up with her bills. When a utility worker from Southern California Gas came to her house to cut off her gas, Love attacked him with a shovel and chase him off her property. Love left to a nearby store to get money orders, one to pay the minimum balance for said gas bill. The utility worker called the police and the Southern California Gas sent ANOTHER utility worker to turn off her gas. 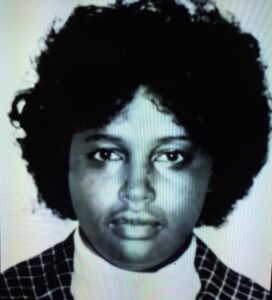 Irate at the arrival of additional utility workers, Love went into her house and grabbed an 11-inch boning knife. Police arrived at the scene demanding Love drop the knife. She refused and threw the knife in their direction. Two officers, Lloyd O’Callaghan (white) and Edward Hopson (black) fired 12 shots at Love, mostly hitting her legs and lower body, but one fatal shot hit Love’s chest. Love died on her front lawn. The officers proceeded to handcuff her lifeless body. The two officers were exonerated by the “Shooting Review Board” who concluded that the officers acted within policy. There were mass community protests and the Los Angeles Police Commission challenged the decision and concluded that “the shooting did not meet departmental standards. The police officers were guilty of exercising poor judgment.” The exoneration of the officers stood. 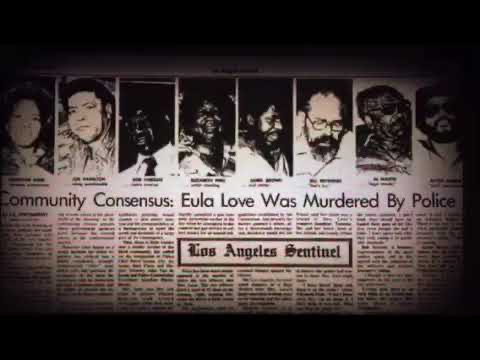 I share my Uncle Billy’s story, I share Eula Love’s story to highlight how we are on ‘Wash, Rinse, Repeat’ cycle when dealing with Black death at the hands of law enforcement and the lack of accountability there is when law enforcement use excessive force resulting in death. The more names we add to the list, the more we forget were there. What my family went through is what countless of other Black families have gone through, and what countless of other Black families will go through if we do not build a new system representative of us as a people…real genuine racial equity. My Uncle Billy’s story reads like a headline from now, when in actuality, the stories of now read like headlines of back then. It is clear that law enforcement is still running plays from the same old racist playbook.

What you are witnessing is the system working just as it was designed. American policing started with slave patrols. It was literally designed to keep Black people in “our place” and until that system is addressed, dismantled, and replaced, then we will continue to keep fighting for our lives.

We need to defund the police. We need to invest in community policing. We need to take back our power and that is exactly what we are witnessing. The people fed up with a system that has persecuted Black people for over 400 years simply for being born Black.

I weep when I look at pictures of my Uncle Billy. I weep thinking about my mom getting a phone call not that her brother had arrived but that he was dead. My Uncle Billy was a man, an actual physical being, not just a “ghost” in a photo. He was a man who was killed simply for being Black in America and it took the deaths of so many other Black people for me to recognize that.

So now I pour libations in your name Uncle Billy, and when they say “Say His Name” I shout out #BillyWilliams, because my Uncle Billy’s life mattered too. Rest in Power, Unc.