You ever come across a photo where the imagery is so layered that you almost feel it telling you it’s story? That’s what I felt, what I still feel, when I look at Harlem Renaissance era photographer James VanDerZee‘s 1929 “Barefoot Prophet”, a photo of Elder Clayhorn Martin, also known as Prophet Martin and the Barefoot Prophet, an eccentric street preacher.

First, can we put some Respeck on the fact this cat is known as “Barefoot Prophet”, the street sermon preacher of Harlem, during one of the most creative periods in not only black history, but American history in general. Where Is This Screenplay? This is a black story that needs to be told! His name is Bare. Foot. Prophet! 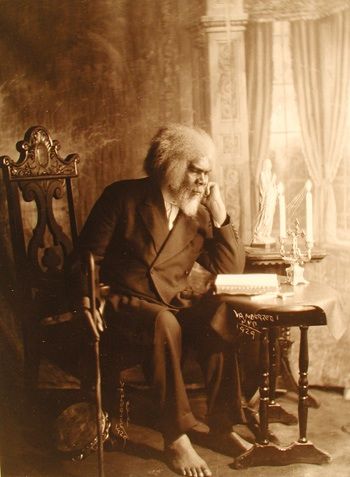 “Barefoot Prophet of 1929” by James VanDeZee, is a photograph of Elder Clayhorn Martin, also known as Prophet Martin and the Barefoot Prophet, an eccentric street preacher.

Born in to slavery in 1851 Virginia, Elder Clayhorn Martin spent most of his life as a wandering preacher. He found his way to Harlem where he gave barefoot sermons.  Martin stated he had been going barefoot since he was a child, stating that God told him to “shed his shoes and walk on holy ground.” Carrying his tambourine, Martin walked the streets of Harlem shouting to those who would listen that ” “Every man is the dwelling place of the Almighty! He is not in the buildings we call the churches today!” (MESSAGE!!!).

In this photo, “VanDerZee constructs a serious image of this well-known Harlem character by depicting him contemplating the Bible and surrounded by the traditional religious symbols of the crucifix and the Virgin Mary. However, his unconventional style is revealed by the inclusion of a tambourine under his chair and his notorious bare feet.”

When Martin died in 1937, he was homeless and VanDerZee and other Harlem Renaissance artists raised money to give him a proper funeral, which was attended by over 500 people.

Salute to the life and legacy of the Barefoot Prophet. Let this be a lesson in not being dismissive of that “old crazy guy”. He didn’t give himself the name of Prophet and its clear that he earned the respect of his community through his words and actions. How can we keep that same energy to protect and preserve the messages from our elders? Food for thought.