This is a difficult part of our history where the heroes become the bad guys. Over 100 years later & this is still up to interpretation. That said, context matters. In regards to this incident, the backdrop is a Jim Crow Houston,TX, a hostile environment for black servicemen who had to endure their presence aggressively protested by Houston’s white civic leaders & white citizens as well as immense harassment & disrespect from the white police force. Remember these are black SERVICEMEN, but were seen as a threat.

These soldiers were members of the Third Battalion of the 24th Infantry, descendants of Buffalo Soldiers who were Black soldiers who served on the Western frontier after the Civil War. This men were serving their country, something that should be treated with respect, as they were treated with EVERYWHERE they went except in the country they were fighting for. And when these Black soldiers arrived in Houston on July 28th, 1917 to guard the construction site of Camp Logan following the United States declaring war on Germany, they were greeted with hostility.

These Black men in military uniforms were told to “sit only in the back of streetcars, to drink from specified water sources, to ignore the daily barrage of insults and epithets, and to treat white people deferentially, especially police officers.”  Day in and day out, these Black men were harassed by the town’s citizens and law enforcement and were met with violence when they talked back.  The whites of Houston feared that if they showed respect to Black servicemen then the Black people of Houston may come to expect that same treatment and god forbid Black people be treated with any decency. Add to that, their higher ranking white officers did nothing to protect or stand up for these men.

On Aug 23, 1917, after a month of escalating tensions, an incident w/Houston police resulting in a black serviceman getting shot triggered approx. 100 soldiers who took to the streets with their rifles…”at the end of which 16 white people were dead, including 5 policemen, w/4 soldiers also killed. It was one of the only riots in U.S. history in which more white people died than black people.” The next day, martial law was declared in Houston and the unit was dispatched back to New Mexico.

There were court martials broken up into three stages, the first being the largest in US military history. In total 118 were indited, 110 were found guilty, 63 received life sentences and 13* were sentenced to death by hanging, WITHOUT the right to appeal. These men all shared one lawyer. Many sentenced were not identified by civilian witnesses &/or denied being part of the mutiny, leading to a change in the military’s appeal process. “Only 2 white officers faced courts-martial, and they were released. Not a single white civilian was brought to trial.” The men sentenced to death were not told their fate until two days before it was to take place and were given no time to appeal for clemency. Their request to be shot was denied. On December 11, 1917, these 13 men were taken in to a truck to the scaffold where thirteen ropes awaited. By the time the public learned of the news, the scaffold upon which they were hung upon was long gone…and so was the memory of this tragic event up until its 100th anniversay in 2017. 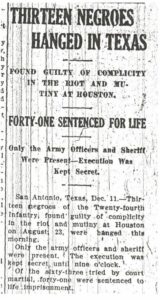 Today, 100 years later, there are those who question the respect of those who protest the National Anthem. They claim it is disrespectful to our troops and yet they forget how disrespected our troops were by the parents and grandparents of those crying foul now. Remind these people of this country’s long history of mistreatment and injustice of Black servicemen, and Black people in general, and how despite their sacrifices they made for this country, they were still treated worst than second-class citizens. Please remind your favorite rapper of this as he attempts to negotiate social justice initiatives with the same people who said “we can’t have the inmates running the prison“… unless you make them the overseer. Hey Stephen!

On this day, we remember those who history forgot. Though difficult to relive, their stories matter. Salute to them & to all servicemen & women who put their lives on the line to protect the rights, freedoms, & liberties they are often denied. We are forever indebted. Thank you for your service…in spite of Amerikkka✊🏾🖤

*There are discrepancies on whether there were 13 or 19 sentenced to death. Based on research, I believe that there were 19 death sentences but only 13 were executed. As with everything, you should conduct your own research to confirm.