On September 11th, 2001, 2996 people were killed (including the 19 terrorist) and over 6000 injured from a terrorist attack on the Twin Towers of the World Trade Center in New York City. I know I can remember that day vividly and remember how quickly this country, and the world, were forever transformed by such tragic events.

Of the 2,977 victims killed in the September 11 attacks, 412 were emergency workers in New York City who responded to the World Trade Center. This included 37 police officers of the Port Authority of New York and New Jersey Police Department, 23 police officers with the New York Police Department, eight emergency medical technicians, 1 patrolman from the New York Fire Patrol, and 343 firefighters of the Fire Department of the City of New York (FDNY). Of those 343, 12 of them were black.

Black firefighters make up only 3% of FDNY and in an eerie coincidence, the 12 black firefighters who were killed on 9/11 represent just about 3 percent of the FDNY’s total deaths. So today, while paying respect to ALL the lives lost and impacted by the 9/11 terrorist attacks, this post is dedicated to the 12 Black firefighters, whose names, faces, and stories are seldom told. Not all heroes wear capes. Today, and forever, we honor the lives of Gerard Baptiste, Vernon Cherry, Tarel Coleman, Andre Fletcher, Keith Glascoe, Ronnie Henderson, William Henry, Karl Joseph, Keithroy Maynard,  Vernon Richard,  Shawn Powell, and Leon Smith Jr. We will Never Forget! Never! 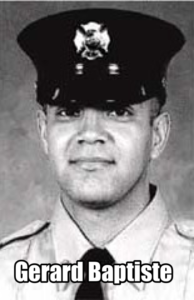 Gerard Baptiste, 35, FDNY,  joined the National Guard; at 27‚ after attending the Military Academy in New Jersey‚ he became a Second Lieutenant in the Reserve and was stationed in Long Island and then in New York City at the 69th Military Infantry. At 30‚ he graduated from the Fire Academy and became a Firefighter. Gerard loved sports. He was so very good at baseball‚ that his friends called him Reggy after the famous Reggy Jackson. ‘Serving the people was his calling in life. He was happy as a soldier serving his country. He was also happy as a Firefighter serving his city.’ 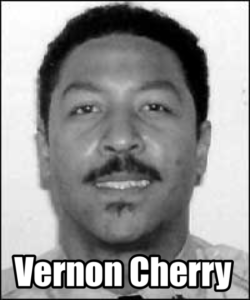 Vernon Paul Cherry‚ 49‚ firefighter‚ FDNY‚ Ladder 118. During his 29 years on the job‚ Cherry made a name for himself. He was an outstanding vocalist who sang at official firefighter functions and joined his band to entertain at social events. Almost 50‚ he was planning to retire at the end of 2001. A father of three‚ he was also a longtime court reporter and well known in the halls of justice. As a black firefighter‚ he helped bridge racial barriers. 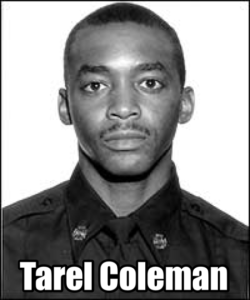 Tarel Coleman‚ 32‚ firefighter‚  FDNY‚ Squad 252. Coleman‚ who joined the FDNY in 1993‚ was nicknamed Prozac because of his intense style of play as a defensive back with the FDNY football team. A father of two‚ he also played softball for three teams and loved the Knicks and the Giants. His brother John is also a New York City firefighter. 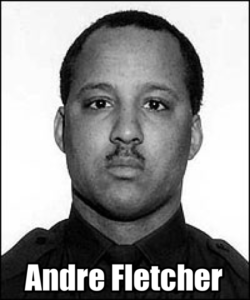 Andre G. Fletcher‚ 37‚ firefighter‚ Rescue 5. Fletcher‚ who joined the FDNY in 1994‚ was posthumously promoted to fire marshal. Fletcher was scheduled to be off duty on September 11th‚ but worked because of a manpower shortage. A top athlete‚ he played football and baseball for the FDNY. Fletcher’s twin brother Zackary is also a New York City firefighter. Fletcher and his wife have a teenage son. 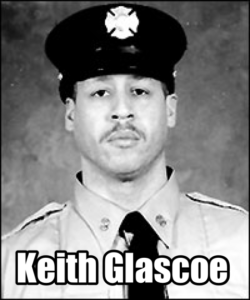 Keith A. Glascoe‚ 38‚ firefighter‚ FDNY‚ Ladder 21. An outstanding football player‚ Glascoe was invited to the New York Jets training camp following his graduation from Delaware State. His second year at Jets’ camp was cut short by injury‚ although he next played professionally for a year in Italy. Glascoe was also an actor with extensive TV credits and a role in the movie The Professional. Once he became a husband and father‚ he was drawn to jobs that required compassion‚ and found his way to Ladder 21‚ where he worked for 3 1/2 years. 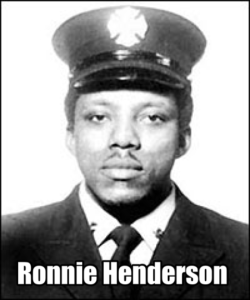 Ronnie L. Henderson, 52‚ firefighter‚ FDNY‚ Engine 279. A courageous firefighter and dedicated father of four‚ Henderson moved to Brooklyn as a teenager. A Marine veteran‚ he attended Alexander Hamilton High School and John Jay College before becoming a longshoreman and then joining the FDNY. He was active in his Newburgh‚ N.Y.‚ community and a member of the Church of God by Faith. 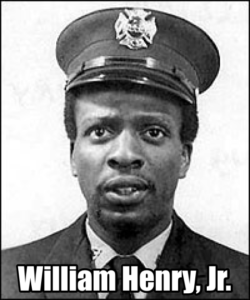 William L. Henry Jr.‚ 49‚  firefighter‚ FDNY‚ Rescue 1. Known as Buddy to his friends‚ the personable two-decade FDNY veteran spent his free time traveling‚ playing paddle tennis‚ and lending a hand to others. While at Ladder 24‚ he volunteered in the nearby St. Francis of Assisi Church soup kitchen. His off-hours work as a contractor also came in handy on the job‚ where he often solved electrical problems at the scene of a rescue. He loved every part of the job – the rescues‚ fighting fires‚ being with the fellows. He never went to work late. It was what he did best. 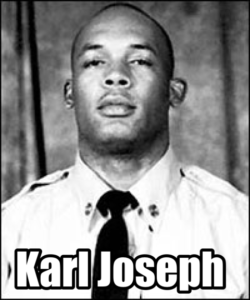 Karl H. Joseph‚ 25‚ firefighter‚ FDNY‚ Engine 207. A probationary firefighter‚ Joseph was described by fellow firefighters as ‘having the right stuff.’ He is survived by his parents. 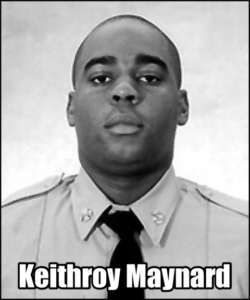 Keithroy Maynard, 30,  was a firefighter at Engine 33‚ Ladder Company 9. He was a very good father and friend. His son Keithroy II meant everything to Keith; he had even started to recruit Keith II to the Fire Department at age 4. Keith was very active in the Fire Department especially in the Vulcan’s Club (club for Black firefighters). Keith loved his family very much and he was a good partner. Keith was always a leader. When he was in college‚ he was the President for the Caribbean Club. Then when he went to work for Continental Airlines‚ he fought for Union (AMR). Then he went to FDNY and joined the Vulcan Society Club fighting for more black men to join the Fire Department. 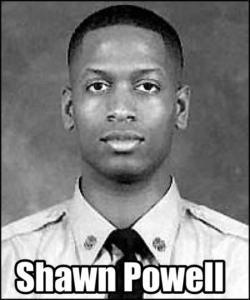 Shawn Powell, 32,  was a firefighter with Engine Company 207 and a United States Army Reservist. Shawn loved music‚ the outdoors‚ his family‚ friends‚ the theater‚ arts‚ traveling‚ creating‚ helping people‚ learning‚ teaching‚ and being the jack-of-all-trades. Shawn Powell loved life and he lived it to the fullest. She left behind his wife, Jean, and son, Joshua, who he had planned taking on a father-son outing soon after Sept. 11. 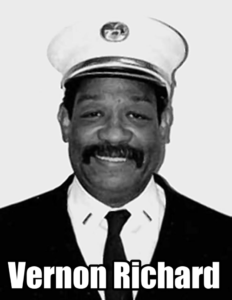 Vernon Allan Richard, 53‚ firefighter‚ FDNY‚ Ladder 7. Richard was employed with the New York City Fire Department on December 17‚ 1977. In 1994‚ he was the 1st black firefighter promoted to the rank of Lieutenant from that list He was assigned to Tower Ladder 7 at 234 E. 29th Street‚ New York‚ until the dreadful day of September 11‚ 2001. On September 16‚ he was promoted to Captain on national TV. He was the third black appointed from that list. Vernon married Dorothy Choice on November 28‚ 1970‚ and from this union two children were born: Vernon Allan Richard II‚ and Vernessa Louise Richard. 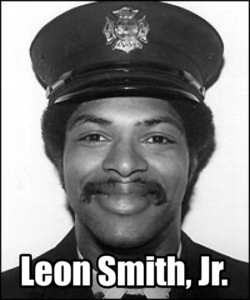 Leon Smith, Jr, 48, firefighter, FDNY, Ladder 118, was appointed to the FDNY on February 27, 1982. Despite facing racism and harassment during his early days in FDNY, Smith never let it get his spirits down. Leon also loved using his hands. He was mechanically inclined and often built miniature racecars with tiny‚ working engines. He had the patience of a saint. He grew up working on real car engines in his spare time and came to be known as the ïFirehouse Auto Mechanic’. When Leon wasn’t working at the firehouse‚ he was often showing another of his many talents‚ by performing in various charity basketball games. He was a proud member of the Vulcan Society‚ an organization of black firefighters. Leon leaves behind his mother Irene Smith‚ wife Marilyn‚ four daughters-Nakia‚ The Twins-Tiffany and Yolanda‚ and Jasmine and one grandson Mekhi.