We have all heard of Bessie Coleman, the first Black woman to earn an aviation pilot’s license and an international aviation pilot’s license. Her story is typically cherry-picked as a fan favorite during Black History Month when the same histories are recycled year after year. And that is not to take anything away from these important figures who deserved to be celebrated for their contributions to the Black history, American history, and society as a whole. But (you know there is a but) our history is so rich and layered and while we continue to pay homage to the most notable, the stories and histories of many unsung heroes are overlooked, if not forgotten all together.

Today, we celebrate the legacies of Black aviators James Herman Banning and Thomas C. Allen, the first Black airmen to fly across the United States in 1932. 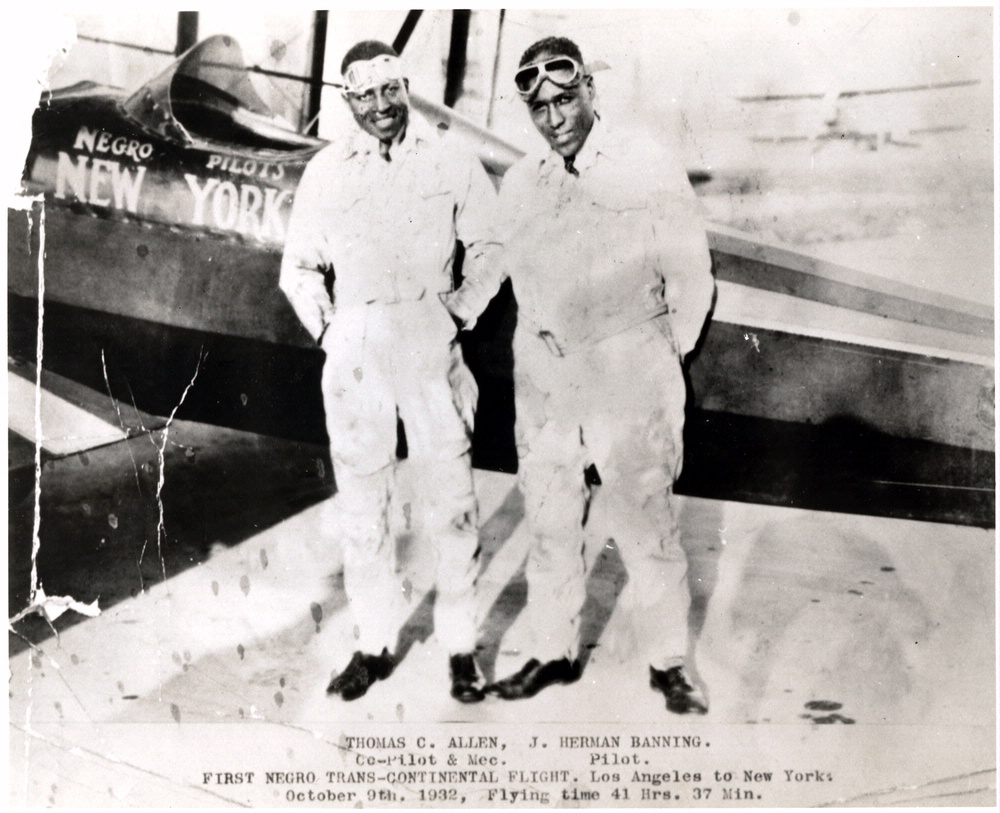 James Banning made his first transcontinental flight in 1932 with Thomas C. Allen in an Alexander Eaglerock biplane.

Born in 1899, Banning studied electrical engineering at Iowa State but his heart was set on flying. After college, Banning struggled getting accepted into flight school due to racism. Through perseverance, Banning finally found a pilot willing to teach him, helping him become one of the first Black pilots in the country. For a while Banning was considered to be the first Black male pilot licensed by the U.S. Department of Commerce, however it was later proven that Emory Conrad Malick holds that honor.

In 1929, Banning moved to Los Angeles where he served as chief pilot for the Bessie Coleman Aero Club, established by Black aviator William J. Powell in 1929. It was there that Banning helped develop programs to help train Black people for employment in the aviation industry. It was also here that Banning met Thomas C. Allen, just four days before their historic undertaking. 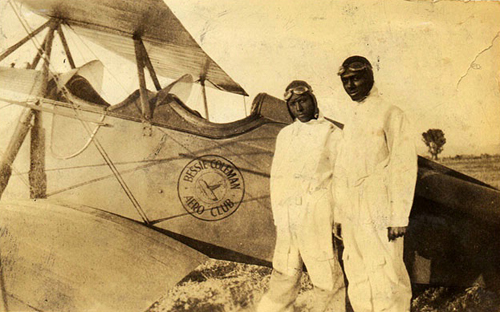 The year was 1932 and the country was deep into the Great Depression. A rumor spread about a $1,000 prize for the first Black pilots to complete a transcontinental flight. Banning and Allen set out to make history. On September 19, 1932, Banning and Allen took off from Los Angeles’ Dycer Airport in an orange and black Alexander Eaglerock two-seat biplane to minimal fanfare. This plane, for lack of a better word, was janky AF. It was 14-years old, badly underpowered, and piecemealed together with various airplane parts. To make matters worse, the plane’s instruments were unreliable, with a compass that was off by 30 degrees.

Oh, did I mention they had only $25 to their name?

So let me run it back for you: Two Black pilots, during the Great Depression, decided to make history by flying across the country, in a janky-ass plane with just $25 to their names.

Allen plotted the cross-country route. The pair’s first stop was in Yuma, AZ. Knowing they would run out of money, Allen thought of the idea to allow anyone who donated money, meals, and so on to sign the lower wingtip of the aircraft, which Allen called the “The Gold Book.” From Arizona, the duo would fly to Texas, Oklahoma, through the Mid-West, and then finally to their final destination: New York City. Allen purposefully charted the course to aligned with segregated Black communities in those areas. Banning and Allen relied on the support of these communities, many who struggled to house and feed their own families during the Great Depression, but knew that was what needed to be done in order to make history. 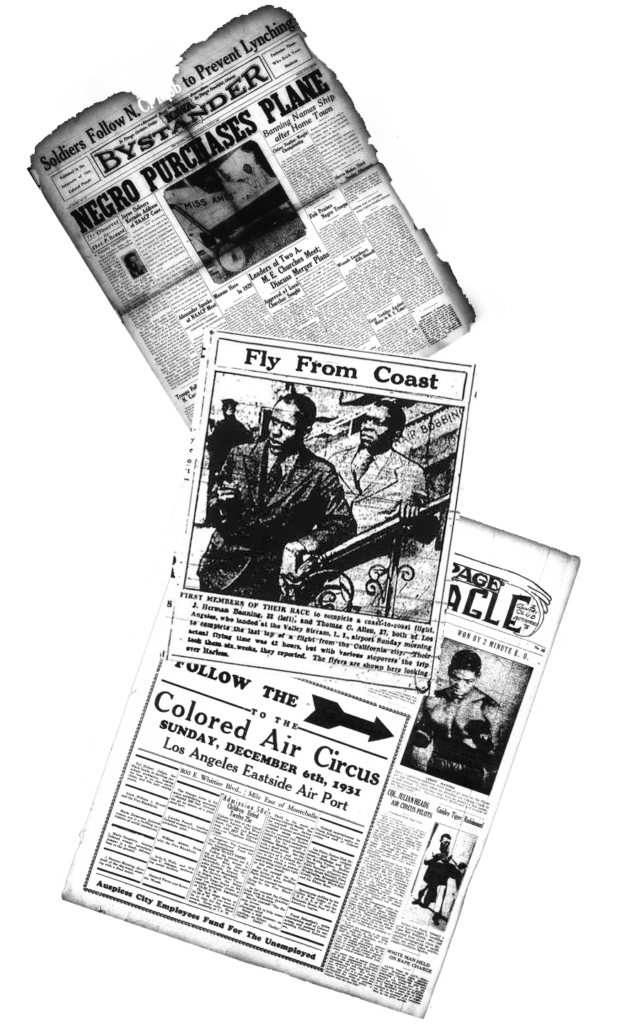 Banning and Allen began referring to themselves as the Flying Hobos because they were begging their way through the trip. The pair did not alert the press of their undertaking as to not jinx their trip considering the dangers they faced. When flying through the high desert, the underpowered plane flew low to the ground, no more than 200-ft from the tops of sagebrush. 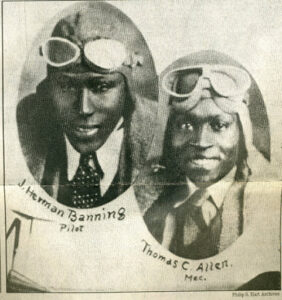 The pair faced challenge after challenge, from being temporarily stranded in New Mexico to having to climb the 8,000-ft El Capitan in dark clouds and rain. Banning wrote of the experience for the Pittsburgh Courier, one of the country’s leading Black newspapers, recounting “We can’t see our own wing tips…We are fools to fly through this without proper equipment.”

After visiting family in both Texas and Oklahoma, word began to spread among Black communities and Black press about Banning and Allen’s journey. People began awaiting their arrival, providing funds and/or resources to help get them across the country. The two gave hope to many Black people who were not only suffering through the Great Depression but also from institutionalized racism that magnified those hardships. At a stop in St. Louis, a trade school teacher had his class help rebuild their engine. After almost crashing in Ohio, Banning found an airplane parts supplier provided all the parts he needed, free of charge. 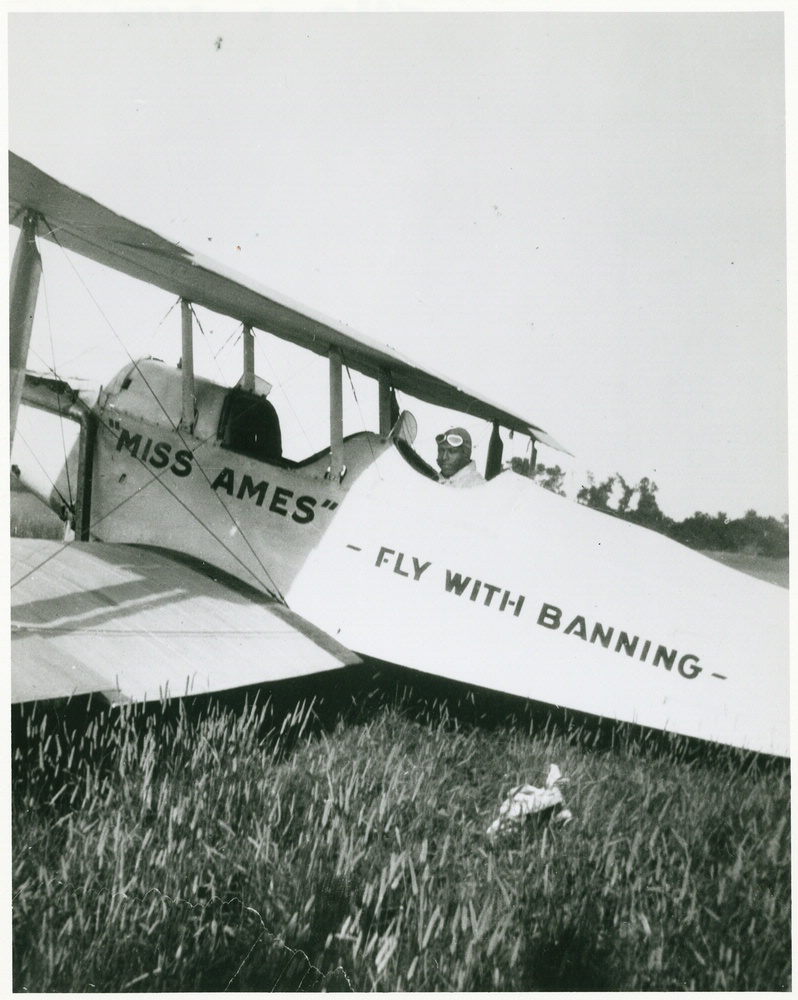 Banning barnstorming in Iowa in 1929 with his airplane Miss Ames

In Pittsburgh, Banning and Allen reach out the the Pittsburgh Courier to assist in securing funding to complete their trip. Being an election year, The Courier connected them with the state Democratic Party who offered to cover the duo’s remaining expenses, handle publicity, and pay to get their plane in shape for the flight back to California on the condition that they drop 15,000 handbills supporting the Democratic Party from their plane over Pennsylvania and writing first-hand accounts of their journey.

On October 9th, 1932, Banning and Allen circled Manhattan, looking down at what was “the biggest thrill of our trip—our goal…. I feel like looping the loop!” They safely landed at Long Island’s Valley Stream Airport.

In the end, James Banning and Thomas Allen flew 3,300-miles in 41 hours and 37 minutes. It took 21 days, the belief in themselves, and the help from many along the way, to accomplish this goal. Unfortunately, Banning was killed four months later from a crash that was the result of a plane stunt gone wrong. Banning was the passenger in a plane flown by a Navy pilot who was trying to show off. 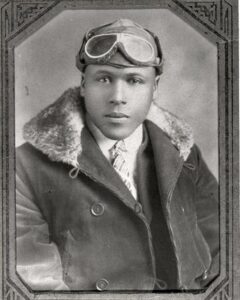 The story of Banning and Allen should continue to inspire us now as it did then during the bleakest of times. It truly highlights how important it is for us to come together and support each other for the greater good. If it wasn’t for them leaning on the Black community, who knows how much longer it would’ve been before the first Black trans-continental flight.

Salute to these heroes for not allowing hardships to stop them from achieving their dreams. They were pioneers in the field of aviation, helping promote and encourage the Black community to see their place in aviation was as limitless as the sky. May their legacy live forever in our hearts and minds and their contribution to Black history, and American history, never go unnoticed! 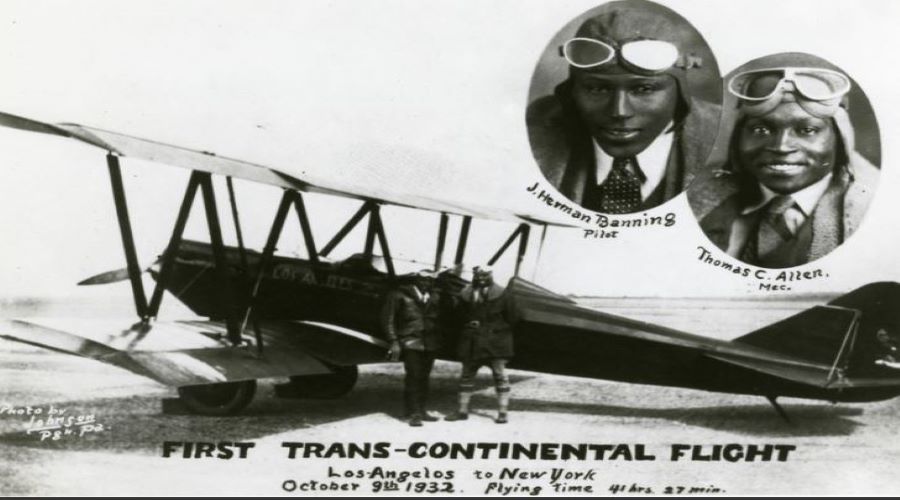