On Monday, August 19th, three-time NBA Champion Stephen Curry announced a seven-figure donation to support bringing back Howard University’s golf team for the next six years. Howard University is a historically black university (HBCU) founded in 1867 in Washington DC. Through this partnership with Curry, Howard University goal is to have their men’s and women’s golf team in place for the 2020-21 season. 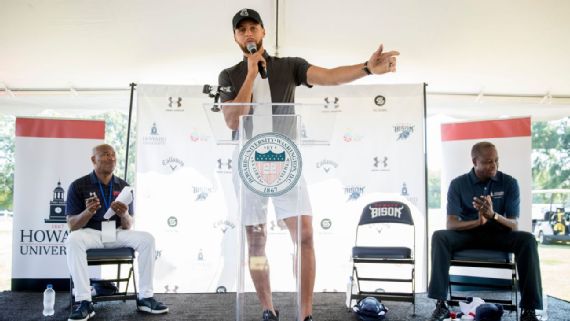 It is stated that Howard’s golf team, which used to compete at the Division II level, was disbanded sometime in the 1970s. Curry decided to help bring golf back to Howard after meeting Otis Ferguson IV, a senior at Howard who was also a golfer, during his visit to the university in January for a screening of a documentary about the 2015 Charlseton, SC shooting of nine black people in church. Ferguson shared his enthusiasm for golf with Curry, noting that he passed on playing golf in college to attend Howard University. This inspired Curry, who is an avid golfer, to take action, beginning conversations with the university regarding the revival of its golf program. Curry played golf in high school and has also participated in amateur and celebrity golf tournaments, as well as serving as host of ABC’s mini-golf TV show called “Holey Moley”.

Curry’s goal for the revived Howard University golf program is to turn it in to “a Division I program for men and women.”   According to Curry, “Golf is a sport that has changed my life in ways that are less tangible, but just as impactful…It’s a discipline that challenges your mental wherewithal from patience to focus, and is impossible to truly master, so when you hear about these passionate student athletes who have the talent but don’t have a fair shot at the game, it’s tough. I feel really honored to play a small role in the rich history of Howard University.”

Salute to you Stephen Curry for paying it forward! We need more of this!
Sign up for our Newsletter!