This is Aaron Dixon, founding member of the Seattle chapter of the Black Panther Party, on the cover of the October 1968 edition of Seattle Magazine. The Seattle chapter was one of the first Black Panther chapters authorized outside of California and was organized by Aaron Dixon, Elmer Dixon III,  Anthony Ware, Garry Owens, and others, after they attended the funeral for 17 year-old member Bobby Hutton, one of the first recruits of the Black Panther Party, who was gunned down by Oakland Police on April 6th, 1968, two days after Dr. Martin Luther King’s assassination. It was there that Dixon met with Bobby Seale, one of the Party’s founders, and told him he wanted a Black Panther Party chapter in Seattle. A week later, Seale took a visit to Seattle and guided Dixon to form the chapter and appointed him as captain. He was 19-years old. 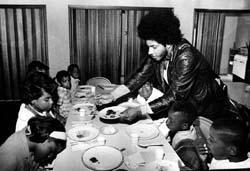 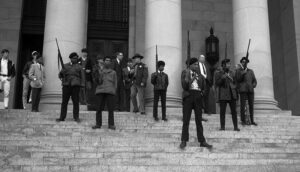 Seattle Black Panther Party protesters outside of the capitol building in Olympia, 1969

Born in Chicago, Dixon was raised in Seattle. Prior to joining the Panthers, Dixon played a key role in the formation of the first Black Student Union at the University Of Washington as well as establishing the Seattle chapter of the Student Nonviolent Coordinating Committee (SNCC). Dixon also assisted in the formation of Black Student Unions in high schools throughout the Seattle area. Under Dixon’s leadership, the Black Panther Seattle chapter “created a free medical clinic (still in operation today as the Carolyn Downs Clinic), five breakfast programs for schoolchildren, the first free food bank in Seattle, a prisoner visitation program, and free legal services for poor people. The Party also responded to calls from the community regarding police brutality and harassment. The Seattle chapter was also one of the longest running Black Panther Party chapters, lasting until 1977. 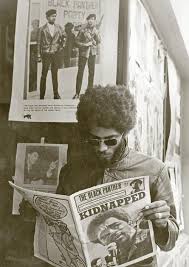 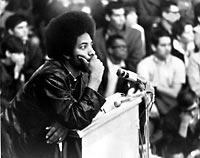 Aaron Dixon, leader of the Seattle chapter of the Black Panther Party, speaks to a Seattle University audience in 1968.

The devil works hard but J.Edgar Hoover and COINTELPRO work harder. Dixon knew he had a target on his back. He stated that “in 1968, the Seattle Police Department put a $25,000 contract out on my head and set me up for assassination. Luckily I was saved by a member of the community. In 1969 J. Edgar Hoover had designated Seattle, Chicago and Los Angeles chapters to be wiped out. When the ATF (Bureau of Alcohol, Tobacco, Firearms and Explosives) left Chicago with Fred Hampton dead, they then went to LA and commenced an eight-hour attack on the LA chapter. Five days later the ATF came to Seattle and met with Mayor Wes Ulmen and asked the mayor for backup support to raid and destroy the Seattle Black Panther Party office. The mayor refused. He did not want to have happen what happened in Chicago and in LA.” 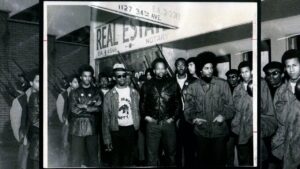 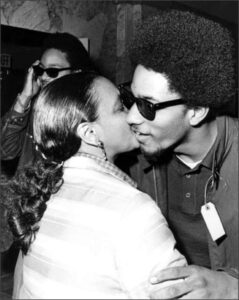 In this April 5, 1968, photo, Aaron Dixon, right, embraces his mother, Frances Dixon, after being released from jail in Seattle on charges of unlawful assembly. The charges were later dropped.

The work of Aaron Dixon, through the Panthers and after, where he worked for “several non-profit organizations, focusing on drug and gang violence and working with homeless youth”, positively impacted the Seattle community’s overlooked and underserved black and poor residents. After the Panthers, Dixon helped get Lionel Wilson, the First Black Mayor of Oakland, elected. Today, at 71, Dixon is still working on issues pertaining to Civil Rights, youth, and Anti War efforts in the Pacific Northwest region. 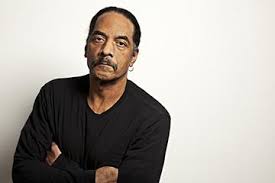 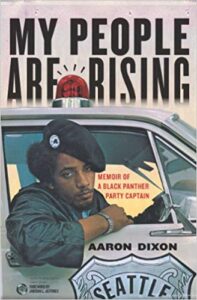 Aaron Dixon is a name that should be as recognizable as Black Panther Party leaders such as Huey P. Newton and Fred Hampton. I fear it’s not because his story did not end tragically. This is similar to the hashtags of Black people killed by law enforcement that ignore the thousands upon thousands of Black people who were wrongfully shot by law enforcement and survived. We must give people their flowers while they are here. So Mr. Dixon, this bouquet is for you!