I always feel compelled to note that Black Like Vanilla celebrates Black history, 24/7/365. There are no days off (time off for mental health wellness not included). 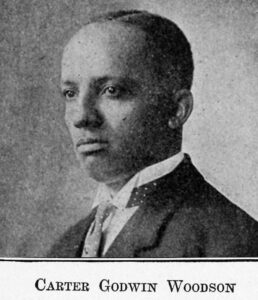 During the 1960s, thanks to the Civil Rights Movement, Negro History Week transitioned into Negro History Month on many college campuses across the country. In 1976, President Gerald Ford “officially recognized Black History Month in 1976, calling upon the public to “seize the opportunity to honor the too-often neglected accomplishments of black Americans in every area of endeavor throughout our history.””

Below is a 1945 clip from All American News, The first Black newsreel, featuring Dr. Woodson speaking on the celebration of Negro History Week. The audio is very low so I transcribed his words, as best as I could, below.

In or own country, we find that the Negro, in spite of his enslavement, achieved likewise. Negroes (?) the trees, drained the swamps, cultivated the soil, and produced the staple of which the wealth of our sub-land(?) has been built.

And then, moreover, the negro became incensed with this country. They were brave soldiers  during the colonial period, the American Revolution, and the 2nd World War with England”

Since we are kicking off Black History Month, I would be remiss if I did not share more information and the historic All-American News!

From the Library of Congress:

Called All-American News, these newsreels were “some of the best and first consciously produced, positive images of black people” living their daily lives, contributing to the war effort, and making history (Reel Black Talk, p. 3-4).

The All-American News Company produced its first newsreels from headquarters in Chicago in the fall of 1942. A November 14, 1942, issue of the Motion Picture Herald reports that the new company was “headed by [Emmanuel] M. Glucksman, former Universal short subject producer and exhibitor” (p. 9).

The newsreels were shown in black theaters in addition to or in place of other newsreels, and the Motion Picture Herald, as well as other film trade magazines of the times, tells us that 150 black theaters around the country contracted to receive the weekly reels upon their debut.

Along with Hollywood veteran Emmanuel Glucksman, the newsreels were filmed and produced by two young black filmmakers, William Alexander and Claude Barnett. Alexander, who was inducted into the Black Filmmakers Hall of Fame in 1995, also narrated and conducted man-on-the-street interviews for a number of the newsreels (Reel Black Talk, p. 3).

In late 1946, Motion Picture Herald reports, All-American began branching out from newsreels. The company began to produce feature-length and short films with all-black casts as well as newsreels and digests. These feature films included the first all-black cowboy films with titles such as Haunted Trail and Galloping Ghost. An October 19, 1946, issue of Motion Picture Herald reports on the production of these Westerns, telling readers that “players will be sent from New York to South Texas where real cowboys will be recruited as extras” (p. 39).

There currently are 35 All-American newsreels in the National Screening room, released between 1942 and 1945. Topics include sports, music, significant events, success stories, human interest stories, black contributions to the war effort, and of course, black troops fighting in the Second World War.