* Please note: The man in the featured image of this post is NOT Hosea Easton

Today is Thanksgiving Day. Hopefully in 2019 we are all aware of the atrocities associated with  America’s true history of Thanksgiving. Click HERE if you need an overview.

On November 27, 1828 (almost 200 years ago), a Black minister, lecturer, writer, and abolitionist named Hosea Easton went before the “colored people” of Providence, Rhode Island and delivered a powerful thanksgiving address that still rings true to this day.

This is a long read and because of that, it ain’t for everyone….which is upsetting. Nevertheless, it’s important to channel the energy of our ancestors. While we sit at our tables today, eating with family and friends, our ancestors were hearing a word or three…an address delivered by a man who felt convicted to uplift his people from despair. An address that helped provide motivation, encouragement, and strength to persevere through such an unthinkable reality so that we could become their wildest dreams.

In this address, Easton “criticized in the harshest manner possible the evil wrought by white men against Blacks (including “beating them with clubs, roasting them alive, dissecting them limb-by-limb, or starving them to death)”. While much of the address is directed toward cruel white behavior, he gives particular attention to encouraging black uplift. Easton also attacks the American Colonization Society, which some Blacks thought was a great abolitionist group. However, Easton saw it as another means by which whites could get rid of the most vocal Blacks by sending them into exile to places such as Liberia, doing so in the name of helping Blacks to begin a new in a land where they could exert their rights and humanity.” 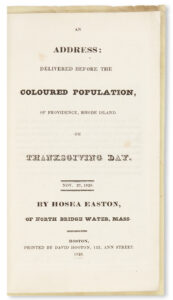 Easton also touched on the hypocrisy of what it means to be a “free” man in this country considering  the rights and civil liberties of said freedom are not equally distributed.  He said:

Now as we composed a part of the number who are said to be free, of course it becomes our duty to consider how far our liberty extends. The first inquiry is, Are we eligible to an office? No. — Are we considered subjects of the government? No. — Are we initiated into free schools for mental improvement? No. — Are we patronized in any branch of business which is sufficiently lucrative to raise us to any material state of honor and respectability among men, and this qualifies us to demand respect from the higher order of society? No. —

Easton also touched on the “allies” which at that time were considered the American Colonization Society. The fact ‘Colonization’ is in the name should speak volumes. The organization was sent up to send free blacks to Africa instead of fighting for emancipation in America. Easton broke down the hustle in his address stating:

They will steal the sons of Africa, bring them to America, keep them and their prosperity in bondage for centuries, letting them have what education they can pick up of themselves; then transport them back to Africa; by which means America gets all her drudgery done at little expense and endeavor to flatter the diety, by making him a sacrifice of good works of this kind.

Hosea Easton was born a free man in Bridgewater, MA in 1798. He was of Anglo, African, Wampanoag, and Narragansett ancestry. His brother pulled the ultimate finesse by marrying one of the town’s well-off while families. The Easton family were considered to be among the black elite. Hosea’s parents were freed slaves and his father served in the American Revolution under George Washington as a fortification engineer. Hosea’s father went on to open an iron foundry which he tied into a labor school he opened for Black youth.

Even still, the Easton family experience a lot of racism, particularly in church.  One church they attended forcibly removed them from the main hall onto the newly constructed porch for Black people. Another church tarred a pew the family purchased. The Easton family was petty though so they pulled back up to the spot with chairs…which lead to them being banished FROM CHURCH!

Easton’s experience with racism in religious settings, combine with his parents gangsta, no doubt influenced his path toward abolition and ministry. Easton began to earn a reputation in both and was pretty well respected when he gave his Thanksgiving address in 1828. But despite his best efforts, Easton couldn’t escape the pitfalls of racism. The school Hosea’s father started did not last long because he was restricted from funding due to….yup, racism. Hosea attempted to follow in his father’s footsteps and start a manual labor college for black men in 1831 in New Haven, CT. Y’all, this man tried to open a HBCU in Connecticut in the 1830s. The school closed after 10 years because funding restrictions due to…bing again, racism. A few years later, a racial confrontation took place in front of a church Easton recently started and a year later, after Easton took over a different church, it was burned down in a fire.

Easton was crushed. Before he died, In 1837 at age 39, Easton published a piece called “Treaties on the Intellectual Character, and the Civil and Political Condition of the Colored People of the United States” where he “concludes that racial uplift could not succeed in a white-dominated society that physically terrorizes Black Americans.”

I’d like to preface what I’m about to say by noting that I do not have my grandparents’ hands because they were about that life in a way we are not…until you factor in religion. Also keep in mind that the Thanksgiving Address was given a few years prior than Nat Turner’s Rebellion. Unlike Turner, Easton seemed handicapped by Christianity, the way most Black people are, in that it restricts how we respond in adverse situations. An example of this can be found in Easton’s Thanksgiving address where he said:

…I would caution you against any revengeful or malignant passions, but stand still and see the salvation of God.

BLACK PEOPLE: HOW MUCH LONGER ARE WE GONNA WAIT FOR THAT SALVATION? YALL ARE GONNA PRAY OUR WAY BACK TO SLAVERY.

Despite any shortcomings, Easton spoke from a place of wisdom and foresight in that Thanksgiving address, stating:

The time has come when our necessities calls aloud for our exertions, to prepare ourselves for the great events which are about heaving in view. Brethren, the dreary night of darkness, which our fathers passed through, is about to disperse. And notwithstanding, we are a divided people, tossed to and fro, and hunted like the partridge upon a mountain…”

Considering we are in the end-of-the-decade Woke Olympics, I understand Easton may not be everyone’s cup of tea, which is fine because that is not the intent of this post. The intent of this post is to highlight an important moment in black history that took place on Thanksgiving…history they like to omit along with the true history of Thanksgiving. The shit is by design. In order to know where you’re going, you need to know where you came from.

I’ll close with a quote from the final paragraph of Easton’s address where he states to every Black ear in the audience:

But you must lay aside all unnecessary diversion and alter your courses; come out of this course of life; distinguish yourselves as pious, industrious, and intelligent men and women. This will demand respect from those who exalt themselves above you.

Here’s to hoping this helps get us there sooner. TBD Happy Thanksgiving!